Bideford U13s
After 3 out of 3 cancelled games, the U13s finally got a run out against Hatherleigh at the Ho!

A great all round batting effort saw us put on a total of 93 for 4. Our top three got us off to a great start with Tom Stone retiring on 25 and Rafe Barnes making a superb quick fire 23. Julian Hayter was unlucky to get out how he did on 11. Steady batting got us up to a decent total with Damon Berry and Jake Cleaves managing a vital 9 runs off the last over. Great batting and communication from all ensuring there were no silly run outs!

Hatherleigh batted well although ran out of steam due to a superb bowling and fielding effort from every single player in rain. Tom topped the bowling with 4 for 11 off his 4 overs along with a run out. Great opening bowling from Otis Sherborne along with a quick run out, not to mention playing 2 years above his age group along with Riley Hornby. Both held their own and did not look at all out of their depth. Tristan was excellent behind the wicket in difficult conditions.

​After a tense last few overs Hatherleigh fell short, just, managing 89 for 7 from their 20 overs. A fabulous match to watch and every one of the team played their part against a strong opponent. Well done to you all. Thanks as always to Joanna for scoring, Keith for umpiring in the rain and Chris for helping the team off the field. Also thanks to all our player’s parents and family for bringing so much lovely food and helping which certainly was very appreciated by all players from both sides. 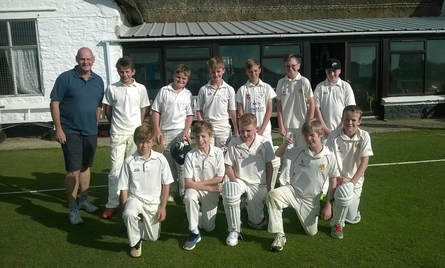 Back l to r: Ian Hayter, Nathan Colley, Julian Hayter, James Hayter, Ben Seaman, Dan Smith, Charlie Beckley... Front l to r: Evan Suggate, Will Sullivan, Jim Keates, Damon Berry, Tom Stone
A tough away fixture at North Devon brought our U13 season to an end. A bright and breezy start from opening pair James Hayter and Ben Seaman took us to 70 for no wicket off 11 overs when James was out for 26. Ben dealt almost exclusively in singles from then on in, being run out in the 20th over for 47, but a quick 18 from Julian Hayter and a boundary off the final ball from Tom Stone took us to 139-3.

North Devon’s openers started at a gallap scoring 10 an over, but our bowlers dragged things back a bit when Ben had Reuben Windley caught behind, and Julian took two wickets to give us hope of an unlikely victory. But Cameron Ford’s excellent 50 and sensible batting from Will Popham took the hosts home with an over to spare.

A good display of fielding was pleasing to see, with Evan Suggate and Dan Smith working wonders sweeping out on the boundary. Will Sullivan and Charlie Beckley too were kept busy.

A decent effort all in all.

Many thanks to Jo for scoring, and to parents for getting the boys there and supporting the team. 😊

Jim Keates in action in 2016
Bideford win by 10 wickets

A hat-trick for Jim Keates and a superb all-round performance from our U13s meant that the long trip to Chulmleigh was a fruitful one, bagging a maximum 20 points as well as being served up a yummy tea!

Losing the toss, Bideford were asked to field first, but the hosts didn’t reckon on the extra pace and accuracy of Dan Smith, who took the first three wickets at a personal cost of just 15. Not to be outdone, Tom Stone bagged himself a brace of wickets for only 8 runs off his two overs, before Jim returned remarkable figures of 2 overs, 4 for 10, all clean bowled. And a hat-trick to boot! Nice one Jim 😊

Chulmleigh’s final total of exactly 100 all out did not look as though it would be enough, and so it turned out. Brothers James and Julian Hayter, opening the innings together for the first time, tried to run each other out, and almost succeeded. But a few wobbles turned into some excellent early running, taking plenty of singles, and then the flood gates opened and were both were particularly harsh on the short ball. James reached his fourth 50 in five matches with his second maximum of the evening, a huge six over mid-wicket, before retiring on 51. Julian went on to make 35 not out as Bideford passed Chulmleigh’s total in the tenth over.

An excellent all-round performance on the night. Our bowling was disciplined and tidy, conceding only 8 extra wide balls. A neat stumping from James, catches by Blake, Jim and Ben, good ground fielding too all contributed to our victory. Batting was delicate and watchful to start, and then nothing short of brutal!

​Thanks to Jo for scoring, and to parents for your support!

​In less than ideal conditions, Bideford U13s defeated their conterparts from Braunton in an exciting, tense finish by 19 runs. Though the winning margin may sound comfortable, it was only possible thanks to an excellent final over from Ben Seaman conceding just a single run, and some very tidy bowling earlier, particularly from Damon Berry, whose super-miserly 2-11 off three overs helped restrict Braunton to 112-4 in reply to our 131-4.

A third consecutive 50* from captain James Hayter, including one memorable ma-hoosive six over the practice nets, was the mainstay of our innings, with excellent support from Ben Seaman (35*) and fellow opener Blake Shapland (12).

The final total of 131 looked a bit light, even in those wet and miserable conditions, but our bowlers stuck to the task of line and length well; just half as many wides were conceded compared to the last match. Braunton were 23-0 at one point, but then opening bowler Damon made sure that the partnership wasn’t going to last any longer by making it 23-2, one great grab from Ben Seaman and one super stumping from James. Ben Gifford made sure their number 4 wouldn’t stay around for very long, bowling him for just 1. Some very tidy spells from Nathan, Will, Dan and Evan made sure of victory, leaving Braunton 112-4 at the end of their 20 overs, Bideford winning by 19 runs..

A superb all-round team effort makes that three wins from three for the U13s...

Many thanks to Martin for preparing the wicket for us again, to Jo for scoring, Andy for umpiring with me and to the parents for help with drinks & tidying up, and everyone for all the support shown to the team.

On a perfect summer's evening in Westward Ho! the crowd were treated to an exciting finish with Bideford just coming out on top.

Winning the toss and batting first, captain James Hayter scored his second 50 retired (10x4s) in two games for the U13s as he and Blake Shapland (14) put on 71 for the first wicket. Ben Seaman (32* with five 4s) and Tom Stone (26*, 4x4s) nurdled and then smashed the Filleigh bowlers to all parts. Some excellent running between the wickets by the pair took the score up to 160-2 off their 20 overs.

Filleigh's reply got off to the worst possible start as Nathan Colley took a wicket with the first ball of the innings - a perfect yorker - finishing with very respectable figures of 3 for 19. But as their batsmen dug in and started to build some partnerships it was looking touch and go. Jim Keates (1-8), Damon Berry (1-17) and Archie Tapsell (1-20) all helped put the brakes on, some excellent fielding particularly by Dan Smith (what a throw!!!), catches by Ben and Blake,  and a run out by James meant that Filleigh fell 13 runs short. An excellent game!
​
Just one thing - we bowled 22 wides - that's an extra 44 runs given away - something the bowlers need to work on during Friday training sessions . . . :-)

Many thanks to Martin for preparing such a good wicket, to Jo for scoring, to the families Keates and Stone for keeping the players hydrated and to everyone for all the support shown to the team.

​An excellent start to the season for the U13s as they blew away the best that Newton Tracey could throw at them with a 77 run victory at Westward Ho!

Captain James Hayter won the toss and batted on a wet and cloudy evening, and with new opening partner Jim Keates set the foundation for a late onslaught from Ben Seaman and Julian Hayter. Aided by 44 extras, the top four battered the bowling to all parts of the ground, with James reaching his fifty in good time, hitting ten 4s before retiring on 53*, and Ben hitting 36* off just 19 balls. 13* from Julian and 11 from Jim took the total to 157-1 off 20 overs.

An early breakthrough from Blake Shapland put Newton on the back foot, and two wickets in two balls from Julian ensured the liklihood of a Newton victory was about the same as us seeing any sunshine before the end of the match...

Tidy bowling from our spin-twins Damon Berry (1-6 off 2) and Ben Gifford (0-12 off 3) heaped even more pressure on Newton's batters, resulting in a multitude of run outs (5 in total) from an alert fielding performance worthy of any IPL team.

An excellent start to the season and a thoroughly professional victory. The only concern is the number of extras given away - 44 out of Newton's total of 80!

Thanks to Martin for preparing the wicket for us, and to Jo Berry for scoring.