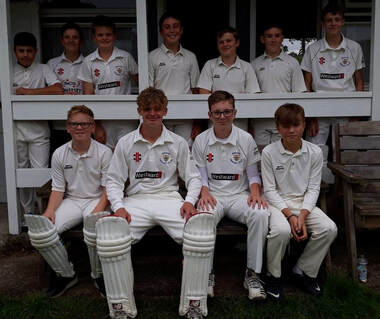 Bideford U15s
Miracle of miracles - the Cricketing Gods actually allowed the U15s to play a game of cricket last night!!

Having had five matches cancelled (three league and two friendlies) due to other clubs not being able to raise a side and poor weather, I was beginning to pull my hair out...(no comments please!!) But we finally managed a 20 over game at Filleigh, in the rain, and almost pitch black by the end...

As some of the guys hadn't played a proper match since June 3rd I thought they may be a bit rusty. How wrong was I?!?

Skipper James Hayter won the toss, and very quickly Filleigh's keeper and slips began to regret the - albeit friendly - sledging as he took 20 off an over, including a flat-bat six back over the bowler's head ... things soon went quiet in the field..!

As this was a friendly match, batters retired at 30, which James did, in the 5th over. Enter Tom Stone, who after a three-week break from cricket looked as fresh and hungry for runs as ever, hitting five crisp 4s before he too retired.

Meanwhile James Evans batted sensibly, using agression when needed, with some sometimes cheeky singles, and he retired after 10 overs on 12 not out.

Julian Hayter scored off almost every ball he could reach, which unfortunately wasn't that many, finishing on 22* as we reached 136 for 3 off our 20, with Jake Cleave and Blake Shapland getting a few at the end.

After a few choccy bics and some squash, Bideford took to the field. The rain had eased off, but only slightly, and only for a bit. Dan Smith's pace was too much for the Filleigh openers, as he removed them both in his first five balls.

Adam Rashid bowled a tidy spell of decent line and length, and showed what he could do, taking 1-13. Rafe and Blake also bowled well but without success. The introduction of Evan Suggett and Ben Gifford effectively ended Filleigh's chances of victory with 1 for 11 for Evan, and 2 for 16 including a very smart stumping from Julian for Ben.

As it got darker and darker Jake Cleave came back on with his leggies/googlies and took a wicket, bowled, although from the bowler's end we could barely see the stumps 22 yards away by then - we just heard the bails falling off! Filleigh ended on 95 for 7.

Filleigh - super hosts as ever, it's always a pleasure to play there, many thanks to them and their manager Pete for the game.

That sadly brings an end to the U15s Colts season, ruined by the weather and lack of opposition. But I hope all the team will be back again next season. 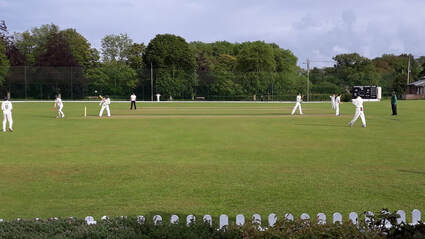 U15s at Hatherleigh
​The U15s finally got some cricket in last night, away to a strong Hatherleigh side. Fielding first, our bowling and fielding was good, pick of the bowlers Harry North returning figures of 4 overs, 4 for 20, and Ben Gifford an excellent miserly 4 overs, 1 for 12. Blake Shapland also took 1 for 12, and Dan Smith got two for 29. Some excellent catches by James Hayter (2) and Ben, while Blake way out on the boundary took a superb one to dismiss the Devon U15s captain. Tom got a good stumping. We gave away too many wides though, something we all need to work on. Bowling them out for 116 however, was a great effort.

Batting-wise, we were disappointing to say the least. When no one gets double figures, there's not much to be said. 60 all out...Gutted  :-(

Thanks to Ben Perry for umpiring in our lovely English rain..