The Under 10s Manager is Chris Luxton

The Under 9s Manager is Andy Davies

All but three of the Bideford CC Under 9s team are new members of the Club Colts in 2017.  Alfie Venner and Riley Hornby were the first pair to bat and only suffered one run-out between them whilst they left the opposition to gift them 26 extras.

The second pair of Harry Folland and William Moseby, and the third pair of Otis Sherborne (c) and Annabel Berry had no wickets taken against them. The best batting came from Millie Wivell who scored 13 runs (which included three boundaries) from 9 balls faced. The first innings finished with Bideford CC reaching a score of 216 (having started on 100 runs as usual).

The second innings could not have started better. Otis Sherborne bowled a wicket maiden to knock Newton Tracey down to 95 (from their 100 run start) then Annabel Berry followed him with her own wicket maiden to bring the score to 90. It took until the end of the 5th over for the score to return to 100.

Newton Tracey’s final score was 135 runs. Bideford’s bowlers were fantastic. They managed to get 4 wickets off the bowler and 4 more run-outs. The most important part of the bowling was the comparison in wides; Newton Tracey 88, Bideford only 40! The wickets came from Otis (2 for 1 off 3 overs), Annabel (1 for 5 off 3 overs) and Harry Folland (1 for 10 off 2 overs).

Bideford won the match by 81 runs. All players worked hard to play as part of the team!

Sam Beckley and Otis Sherborne opened the batting for Bideford to start the match and made a cautious start. Although the bowling was not very strong from the opposition it was not easy to score from either. Riley Hornby top scored with 9 runs from 14 balls faced. The last runs scored in the innings were 4 runs straight to the boundary by Riley Bowden. The score to beat was 168.

Bideford fielded second and Arlo Sherborne opened the bowling with a wicket off his first ball. Adam Rashid bowled the second over and collected a second wicket followed by a wicket from Millie Wivell. Damon Berry (c) took the remaining 2 bowled wickets. There were 5 run-outs from the bowling of Adam, Riley Hornby, Damon (2) and Holly Stone who replaced Jack Kingston when he fell ill towards the end of the match. In total Bideford took 40 points from Chulmleigh in wickets.

It is unusual at this level of cricket for the level of wides not to make a huge difference to the scores but in this match the level of extras was almost exactly the same (Bideford 55; Chulmleigh 58). Chulmleigh even scored 12 more runs off the bat than Bideford.

Bideford won by 15 runs because of their excellent wicket taking! Well done team!

The first match of the season started late due to traffic lights on the route into Westward Ho! Once all had arrived Bideford won the toss and chose to field first. The first pairing for Holsworthy of Archie Harris and Tyler Ivey added 19 runs to the 100 run starting total but did lose one wicket, taken by George Shapland (2-4 from 3 overs).

All other Holsworthy batsman pairings tried hard to keep the runs increasing but the Bideford bowlers were able to take 8 wickets in total over the first innings. All Bideford players had a chance to bowl except Harry Staddon who worked hard as the team wicket keeper. In addition to George’s two, the wicket takers were Millie Wivell (2-6 from 2 overs), Riley Hornby (1-4 from 1) and Cody Simmons (1-2 from 2).

This season’s Bideford CC Under 10s squad has 4 brand new members. All went out to bat enthusiastically. The score was helped along by the extras scored (50 wides, 12 no balls and 1 leg bye) but there were 37 runs that came from the bat. The fourth pairing of Sam Beckley (4 runs) and Damon Berry (c) was the most prolific with Damon top-scoring on 22 runs from 16 balls, including 5 boundaries.

Bideford managed to keep their wickets conceded to 7 in total, resulting in a final score of 165. Bideford won the match by 40 runs. Well done to the whole team! 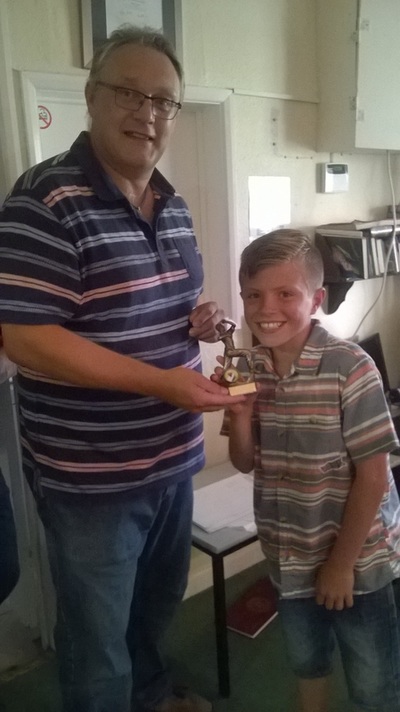 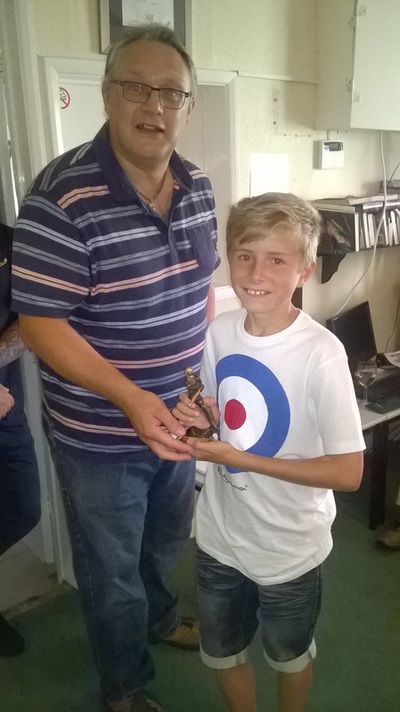 Edge of the seat stuff as we beat North Devon! 2013 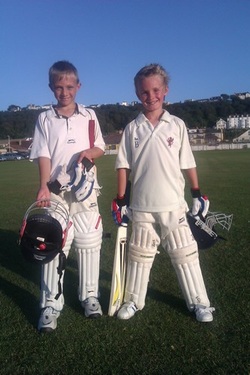 Ben Seaman and James Hayter
What a nail-biting superb victory for the Under 10s against a strong North Devon team currently top of the table! (July 9th)

The visitors batted first as Captain Jack Ford opened the bowling with a tight and tidy spell taking 1 for 9 off his four overs, and he also took a fine one-handed catch to give Dan Bailey the first of his two wickets at a cost of 16. Ben Seaman (2-14) and James Hayter (2-19) also took a couple of wickets each towards the end of their innings which meant that North Devon's total was reduced to a more than useful 155 off their 20 overs.

Our innings was given a major boost at just the right time by Sam Pyle with a fine 15, after Jack (13*) and Dan (10*) had started the run gathering momentum. But last pair Ben (10*) and James (11*) came to the wicket needing 29 for victory which they duly got with some excellent running between the wickets and some lusty shots. With the total on 156 James blocked out the last four balls to give the boys a well-deserved win.

The team should now have learnt about backing up the wicket-keeper and bowler when fielding as 15 overthrows were gifted to North Devon. But on the plus side our bowlers gave away a third fewer wides than the opposition, which in the end proved vital.

Well done to everyone, an excellent team effort and a superb win!

Four in four for James 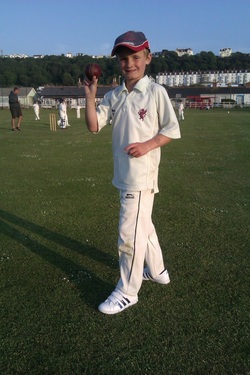 James Hayter - 4 wickets in four balls
Bideford Under 10s carried on the good form shown by all sides from the club this year with a great win against Chulmleigh on Thursday 6th June.

Batting first, all Bideford pairings (including those on debut) put on good runs, with skipper Jack Ford leading the way with some good scoring shots all around the wicket.

Posting a great total of 178, Bideford's team set some challenging fields as the Chulmleigh openers were pegged back by tight bowling from Jack and Ben Seaman.

The 'Tango' moment of the match came however, with the introduction of James Hayter into the attack.

Immediately hitting a good length James' first four balls all claimed a wicket which immediately made the visitors' struggle even harder - a super spell of bowling.

Good fielding including a brave performance by keeper George left Chulmleigh short of the mark and the deserved win went to Bideford.

Onwards to the next match ...