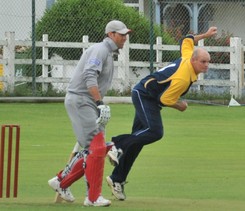 Representative Cricket:
Richmond U13, Devon U16, Devon U18, Devon Over 50s

Best Cricketing Moment(s):
Winning the North Devon League Div One title as captain in 2011, and also winning the umpires award for that year - the 2nd year in a row we won that. And winning the Umpires award three seasons in a row.

Playing against Somerset in 2008 and 2013, bowling at Trescothick et al, getting 4 of the Cidermen out!

Century and 6-fer in same match against Braunton having got a 5-fer against them the day before in a different league!

Once took 5 wickets in an innings and had 5 dropped catches - poo!

Playing cricket in Tokyo in a Pakistani league!

So many great things about this wonderful game, can't mention them all here.

Watching Jack being sent off by our skipper for his usual kind of behaviour at Teignmouth in a Devon League Div A match!

Too many funnies to write down here!
Worst moment - first duty as Captain of Bideford in 2003 was to write an obituary for our friend and team-mate Steve.

Anything Else
Enjoy enjoy enjoy this most wonderful of sports.